"I believe in liberality. I never ask a hungry man about his past. I feed him, not because he is good, but because he needs food." - Tim Sullivan 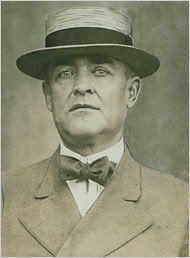 Isn't it remarkable that a man who embodied everything, both good and bad, of the Lower East Side, could have vanished from our collective memory so quickly?

Sullivan was full of contradictions. He was generous, a powerful ally to immigrants and women, a model kid who came out of the slums and worked his way up to position and power. He was also the colleague of gangsters, a receiver of graft, a compulsive gambler, the ultimate political insider.

He never lost an election.

I think he must have had such charisma it could have knocked you over.

The New York Times did a profile of him in 2009. The current perspective on Tim Sullivan is primarily as criminal. But, Tammany, and Tim personally won the fervent loyalty of many working people - people who preferred Tim's brand of politics to anything that the uptown Protestant reformers had to offer.

Complexity often gets erased by time. But then, history is never a single story.
Posted by Downtown Art at 10:00 AM