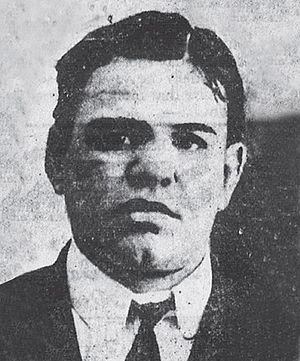 By 1900, Eastman and his gang had laid claim to all of the Lower Eastside.

An excerpt from Herbert Asbury's "Gangs of New York"

".. He began life with a bullet-shaped head, and during his turbulent career acquired a broken nose and a pair of cauliflower ears.. He had heavily veined sagging jowls and a short bull neck, plentifully scarred, as were his cheeks. ... He accentuated his ferocious and unusual appearance be affecting a derby hat several sizes too small, which perched precariously atop his shock of bristly, unruly hair.

He could generally be found strutting about his kingdom very indifferently dressed, or lounging at his ease in the Chrystie street rendezvous without shirt, collar, or coat.

His hobby was cats and pigeons. Monk Eastman is said to have owned, at one time, more than a hundred cats and five hundred pigeons, and although they were offered for sale at his Broome Street pet shop, it was seldom he could be induced to part with any of them.

He sometimes went abroad, on peaceful missions, with a cat under each arm, while several others trailed along in his wake. He also had a great blue pigeon which he had tamed, and which perched on his shoulder as he walked.