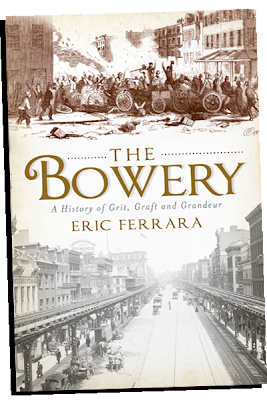 Eric Ferrara has got to love the Lower Eastside.

Second, he founded the Lower Eastside History Project, an award-winning center for research, information, and tours of the LES. And if that weren't enough, he also founded the East Village Visitors' Center and the Museum of the American Gangster.

Then, there's his books. The most recent is "The Bowery: A History of Grit, Graft, and Grandeur" -


"...celebrated as a haven of counterculture, entertainment and theater and denigrated as New York's "Skid Row. Home to bums, bohemians, criminals, artists, performers and the rich and poor alike, the Bowery has attracted the most diverse population of any place in all of New York City's history."

Yes, if you want to dig a little deeper into an amazing time in New York's not-too-distant past - Eric's the guide you want. Check out upcoming events on the LESHP website!!
Posted by Downtown Art at 10:14 AM