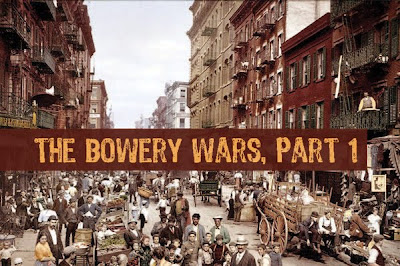 "I am a thorough New Yorker and have no narrow prejudices." - Timothy D. Sullivan, congressman and leader of Tammany Hall

We're getting ready to open a new music-theater piece - THE BOWERY WARS - Part 1 of a two part epic about the Lower East Side circa 1903. We will be performing it outdoors in the streets. For more info, check our website: www.downtownart.org

THE BOWERY WARS is set in the fall of 1903, when Tammany Hall's disgraced Democrats battled to retake City Hall, and the violence between The Eastmans and the Five Pointers over control of the Bowery exploded into the worst gun battle New York had ever seen. It raged over six hours and involved over 100 gangsters, but not a single arrest was made, not a single witness would come forward.

In the coming weeks, I will post excerpts and quotes that either appear in our piece or have been a source of inspiration.
Posted by Downtown Art at 9:46 AM