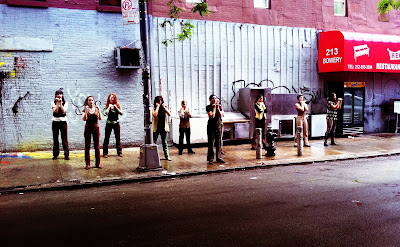 People stopped, watching, puzzled. 'What's happening?' they asked each other, looking at the silent, bowler-hatted actors, dancing somehow in unison. Then they'd start to notice that all the silent actors and the watchers that surrounded them had earphones. For them, this wasn't a silent mystery. This was a story - and the key to enter was the tiny mp3 players in their hands.

Yesterday, on a cold cloudy Sunday, we finished a four week run of 'The Bowery Wars, Part 1.' After weeks of rehearsal and performance on the crowded LES streets and alleys, our company of young performers couldn't be thrown. On Saturday, it rained for 15 minutes - the audience all pulled out their umbrellas, but the company didn't blink. Their concentration in the face of all NY threw at them was fierce and unwavering. They had a job to do and they never let go of it. 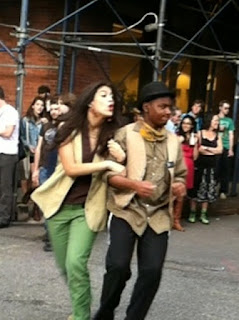 Not in the face of a hundred obstacles: not in the packed density of a street festival, not when surrounded by a hundred Amish travellers, not in the face of a frightening bicycle accident, a giant poodle, a wedding celebration, or any of the hundreds of encounters they had with New York over the past two months. New York, was, in fact, part of their story. They displaced no one. Instead they collaborated with the life and people of the city in ways that impressed me deeply.

It's impossible to go through this creative process, which after all is inspired by the city, and not grow in appreciation for the abundance of life that crowds the streets. It was an experience we won't forget - to bring our story of the Bowery to mingle and merge with all the other stories the city gives birth to every moment of every day. 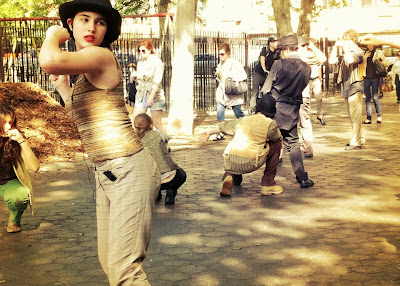